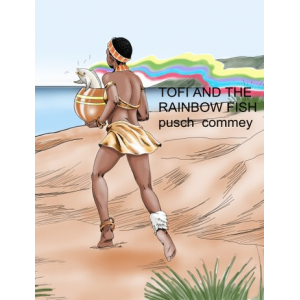 Book Description: Tofi, a Zulu, meets a dying Nii on the shores of the Zulu kingdom. Nii, from the Gold Coast of Africa had been thrown overboard a ship when he tried to stow away to America. A rainbow fish saves him from sharks. Nii is accepted by the Zulu people and taught how to look after cattle. When he discovers that despite the wide ocean, the Zulus could not fish, he starts a fishing revolution. Soon the whole community join in the march towards the sea. One day the rains fail to fail, the grass withers, the cows die. but like true love, the sea never dries. There is plenty to eat. Nii feels homesick and returns to see his mother. Tofi wants him back but first has to find the rainbow fish. It's an impossible quest but driven by faith alone she fishes the sea for months and eventually succeeds. But before Nii can come back Tofi has to dance in fire. She is taken through a pulsating African Fire Dance, during which she gains FIREPOWER. she also begins to understand several languages. The fish then has to return to the sea. In a run to nowhere, Tofi returns the fish who rides the crest of the wave as King. Will Nii return? And how?

An adaptation of the extraordinary African story Tofi's Fire Dance, by the same author, for 6 to 9 year olds. Excellently illustrated, this is a book parents in the diaspora should read and share with their children for its message of unity.